When the Imports Team at Suffolk Trading Standards came across some suspect ladders, the Test & Research Centre was there to help.

Suffolk County Council Trading Standards are responsible for ensuring the goods arriving at the Port of Felixstowe are safe for the UK market. The Imports Team is 100% funded by the Office for Product Safety & Standards (OPSS). When they came across some suspect ladders in July 2021, their first point of call was the Test & Research Centre (T&R).

Across two shipments, they seized four different models of telescopic ladders and a two tread step ladder – 537 ladders in total.

We tested samples of the seized ladders against the relevant parts of EN 131. Whilst they passed some of the requirements, there were some worrying findings.

Whilst the ladders all stated EN 131 on their labels, what we found showed they were far from compliant.

With rung spacing a third bigger than permitted by EN 131, deflection limits passed by over 200%, structural failure under test load and damage from drop testing, it all showed that Trading Standards were right to intervene on this consignment.

In total, T&R have helped Trading Standards stop over 800 dangerous ladders from entering the UK market through the Port of Felixstowe.

The first ladder we tested was the two tread step ladder. It had markings that state “EN 131”.

“Do not stand on the top two steps of a standing ladder….”

So if this product really did conform to EN 131 as a step ladder, it would have to be marked with a label that tells the user not to stand on it! 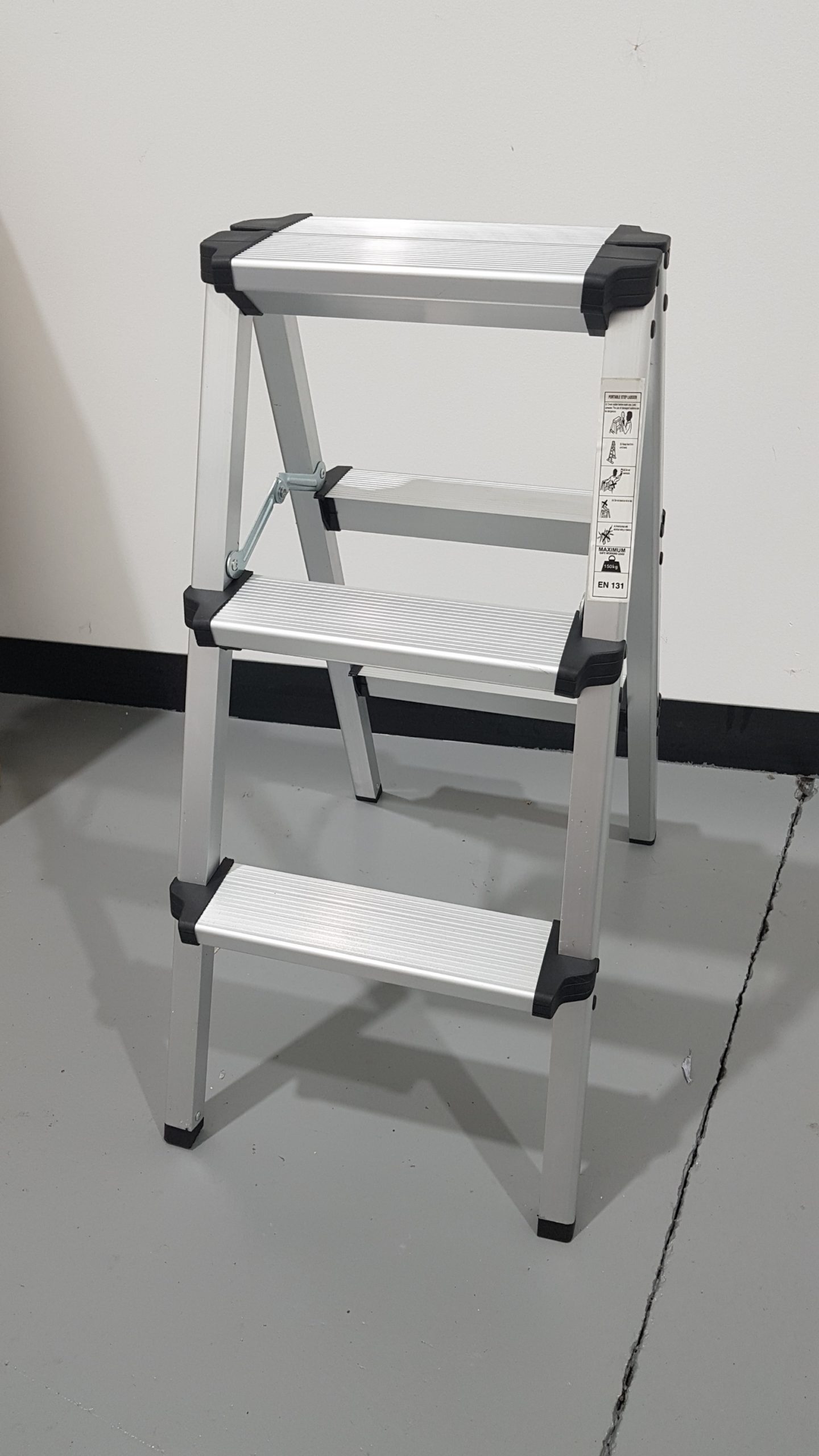 The testing of the product did not fare much better. Dimensionally, the width of the step ladder at the base was narrower than the minimum limit. This means it has a reduced amount of sideways stability.

The connection between the steps and the stiles was also poor. With the torsion test load applied, there was significant movement between the tread and the step. In use, with this amount of flexibility, it could cause a user to fall.

Continuing with the test schedule, it did pass two of the strength tests without collapse or rupture.

But finally, the step ladder had another significant failure on the bottom stile ends test. Before the test load could be applied, the stile material broke. This occurred on both stiles, pulling in towards the centre of the ladder, and outwards away from the edge. In use, a user could cause the stile ends to buckle and then fall. 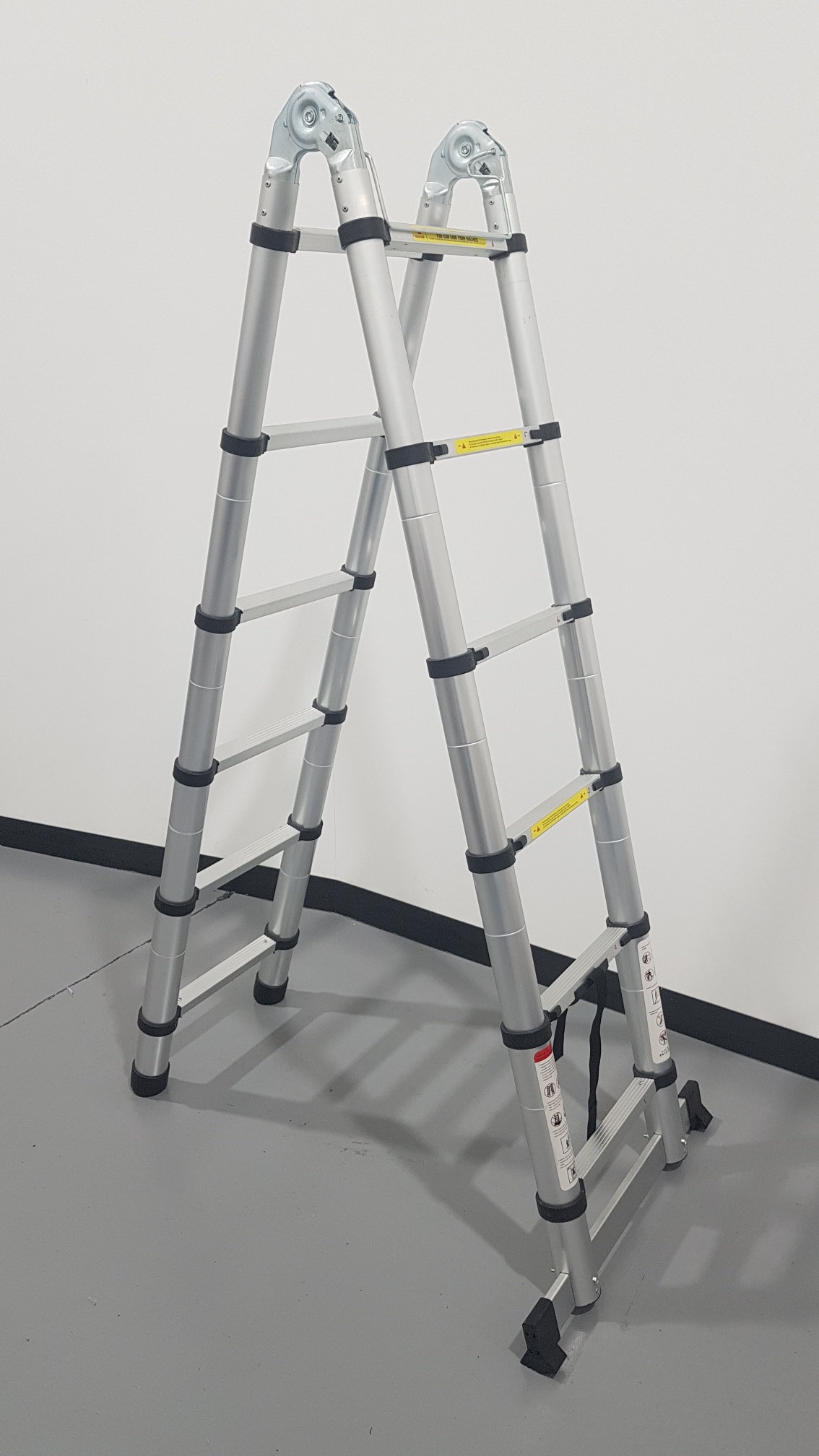 The first of the telescopic ladders we tested was a 1.9m single hinge joint ladder. We tested this one against EN 131-4, the standard for ladders with single or multiple hinge joints.

This performed very poorly and failed almost every examination we made. 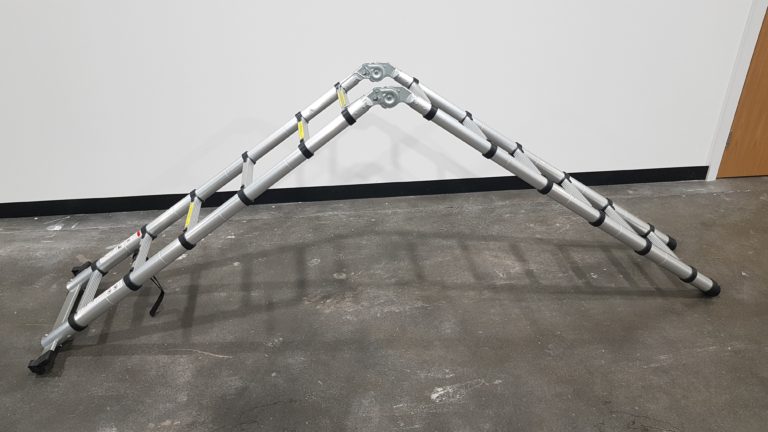 The base width where the ladder contacts the ground was also much smaller than required, compromising stability.

In addition to this, there was up to a 34mm difference in the pitch of the rungs. The standard requires that rung spacing is +/- 2mm! Excessive rung pitch changes could cause users to miss their footing whilst climbing and fall from the ladder. 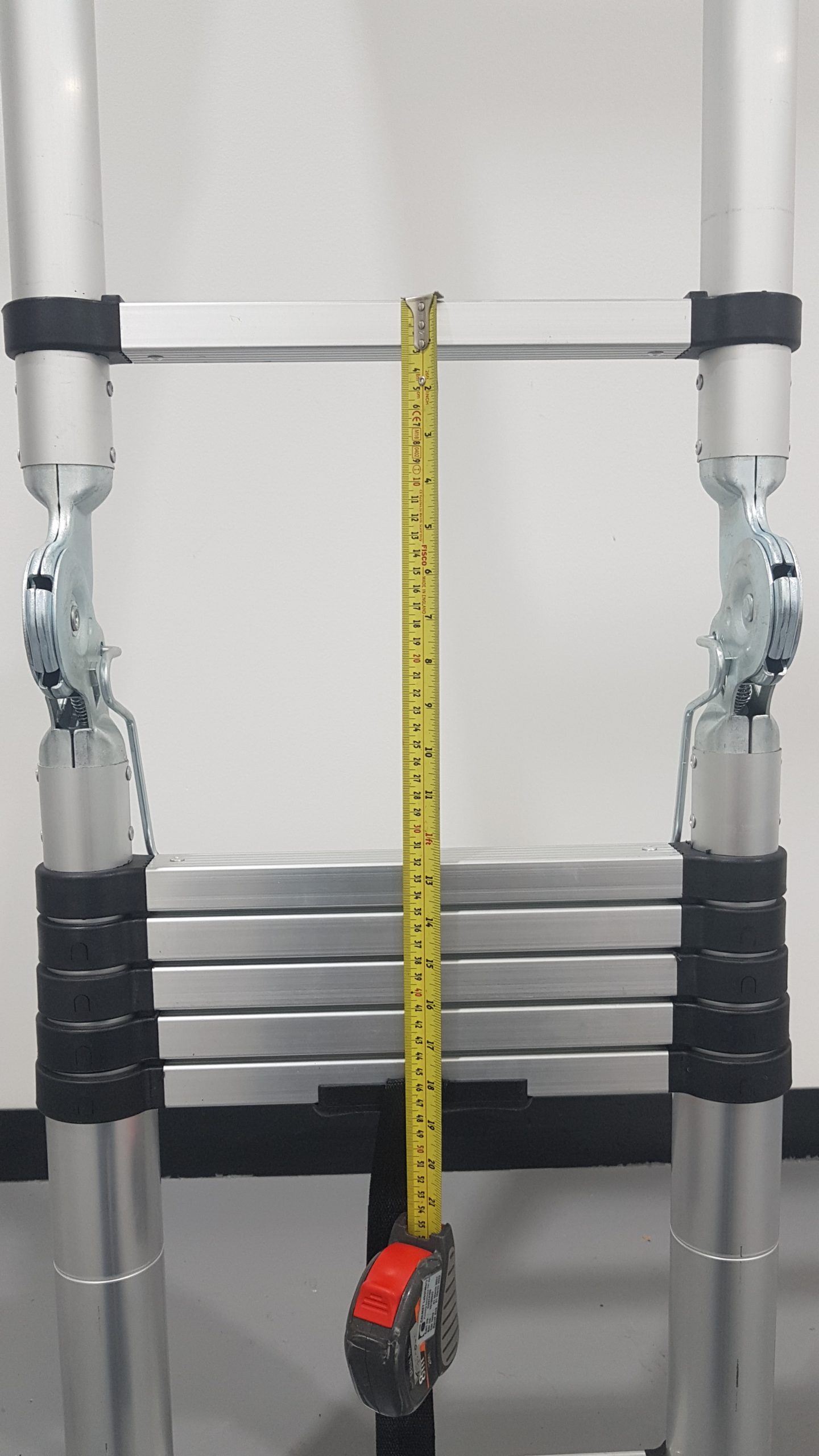 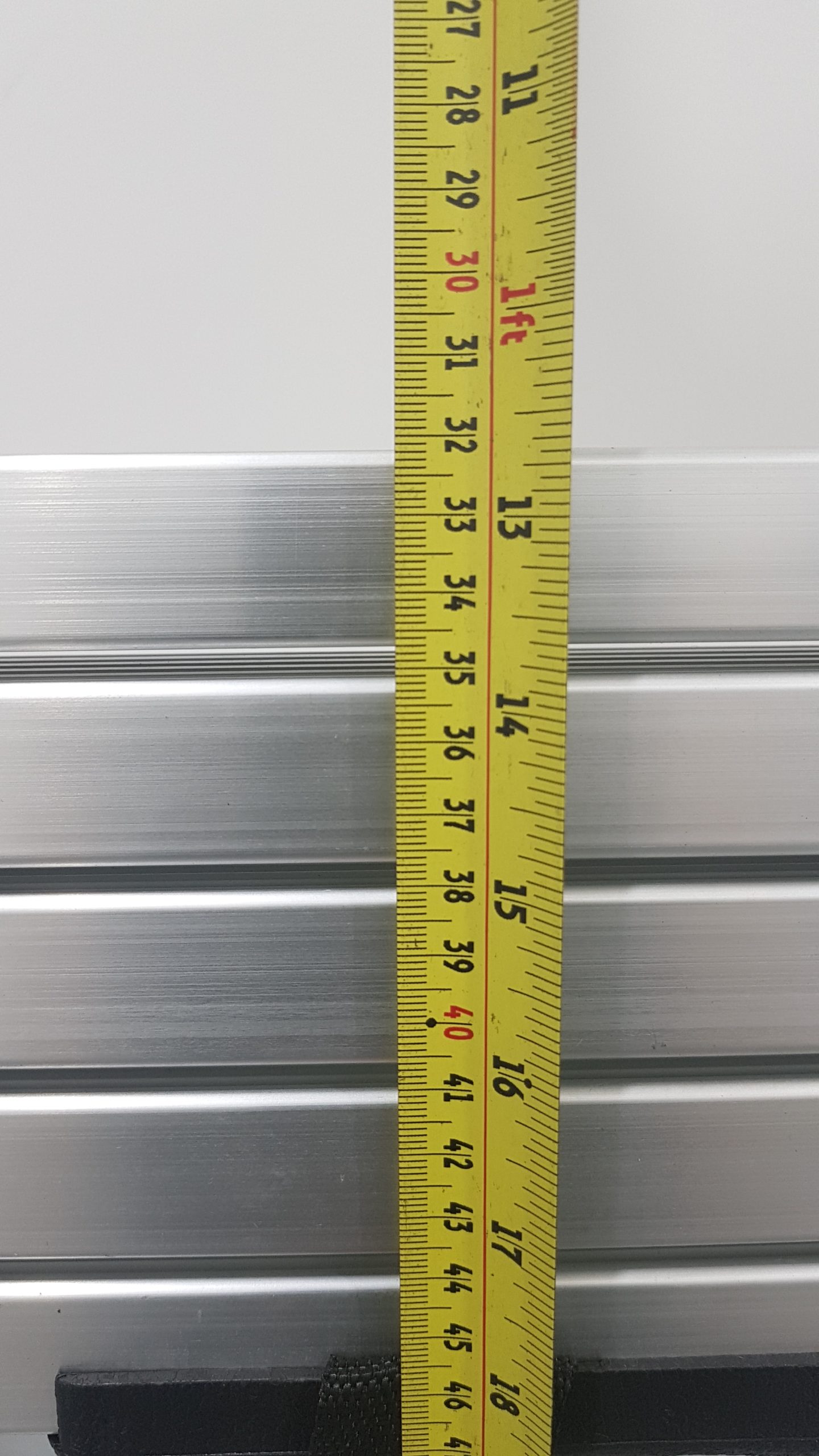 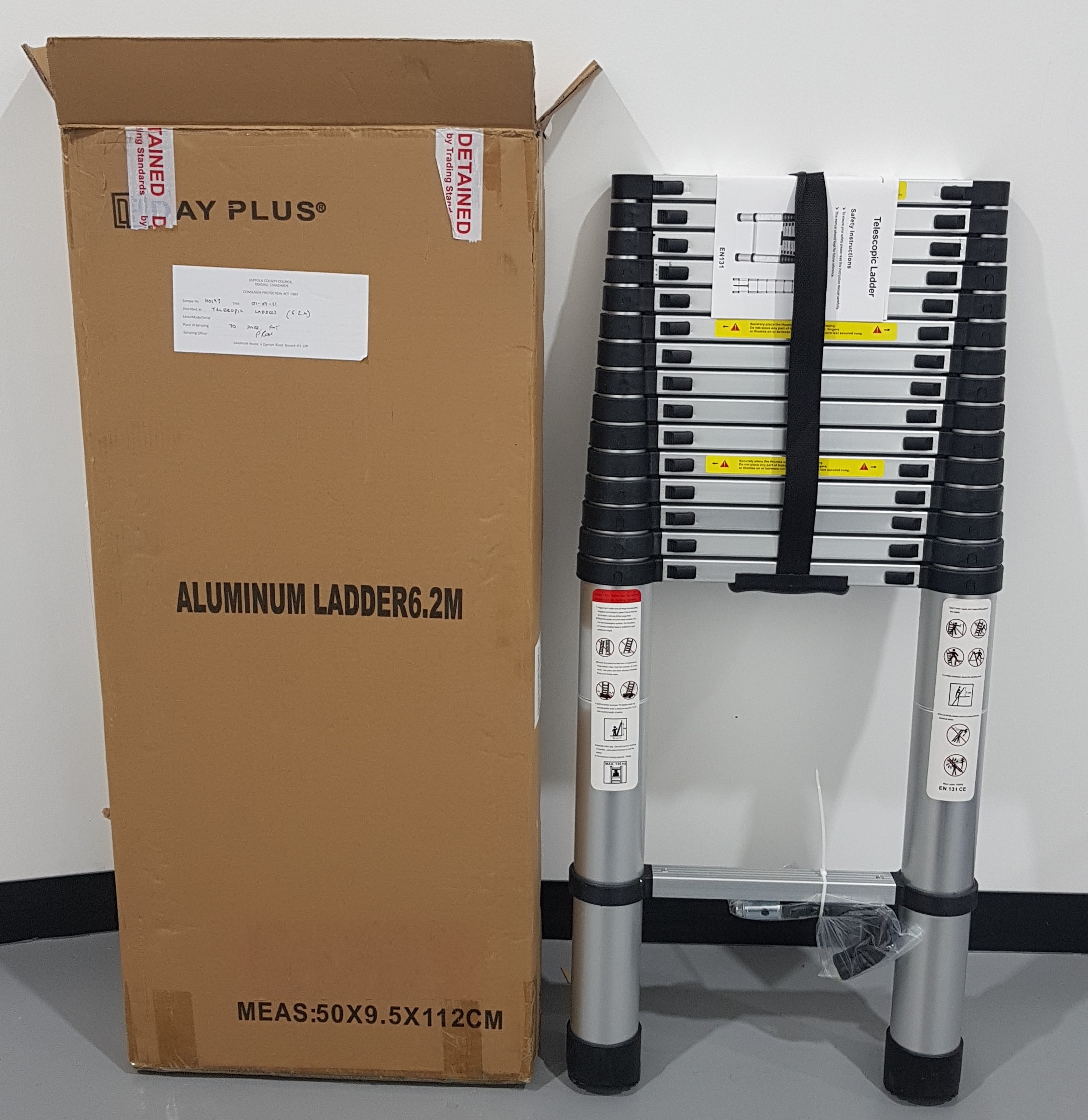 Lastly, we examined a 6.2m telescopic ladder. This one failed against nearly every clause of EN 131 we looked at, and some of the tests could not be completed due to structural failure halfway through the test sequence.

Dimensionally, the sample failed in many areas. Most worryingly was the rung pitch, where the upper limit is 300mm. The average rung pitch measured was 394mm, nearly a third over the limit. At that distance, it would be difficult for a user to climb safely. 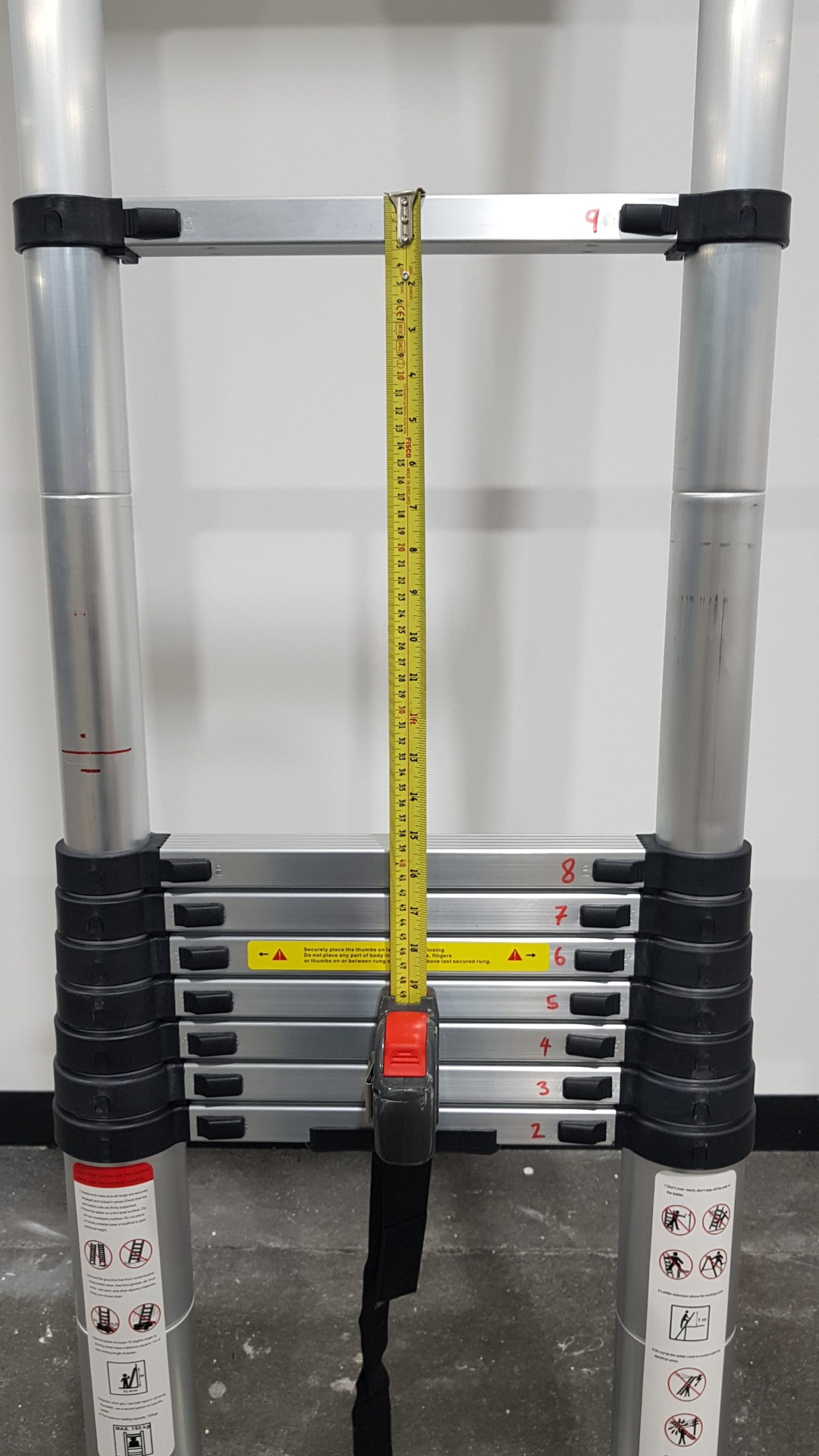 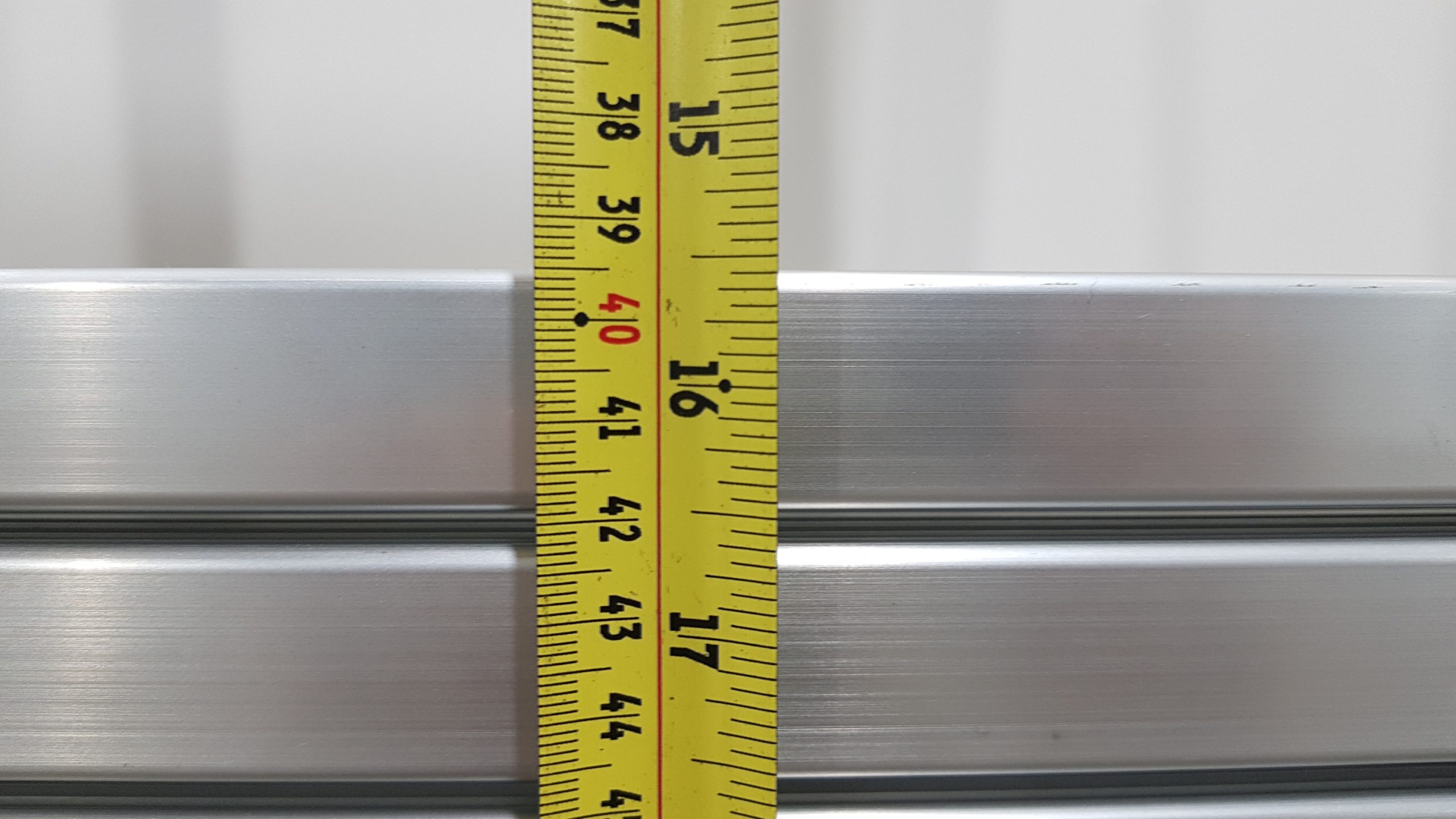 The base of the ladder was also too narrow. As with all EN 131 leaning ladders, the base of ladders longer than 3m in length needs to be wider than the outside width of the stiles. At 6.2m long, the base width should be 1098mm. We measured the actual base width at 486mm, less than 50% of what an EN 131 compliant ladder should be. This will significantly affect the stability of the ladder. 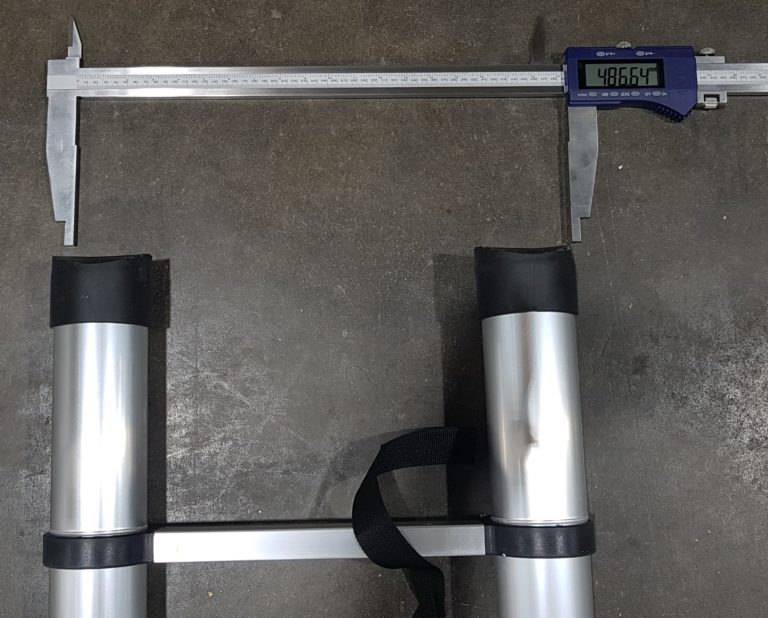 EN 131-6, the standard for telescopic ladders, also requires that rung sections must always be stored at the top of the ladder, if the ladder is not fully extended. This means for the user, the rung pitches are always regularly spaced and therefore reduces the risk of tripping on stowed rungs. The sample we assessed was not compliant as it allowed the rungs to be stored at any position. 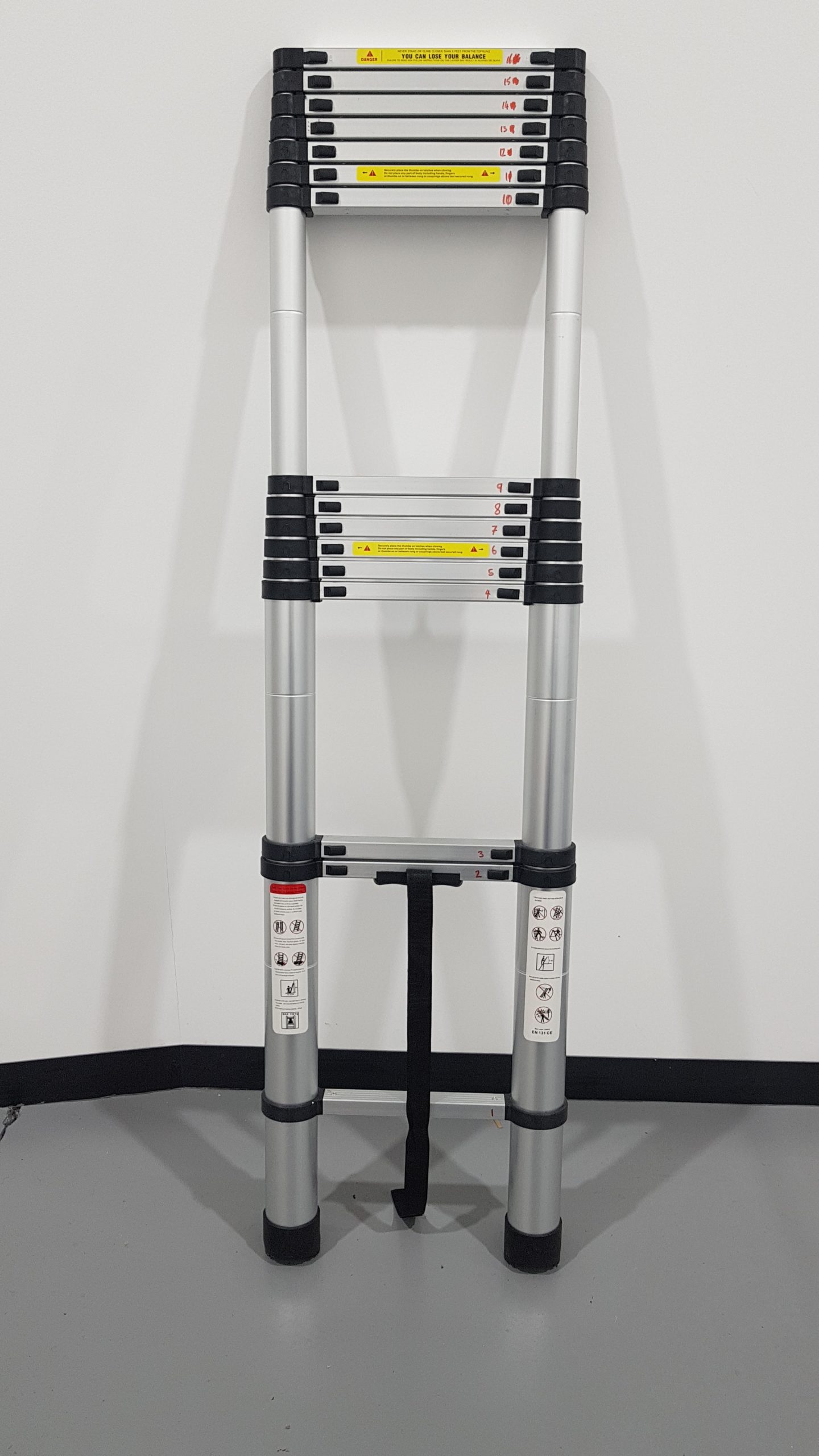 Then we moved onto the physical tests and we found more issues. The first test in the sequence is a pre-conditioning drop test. We set up the fully extended ladder, held it vertically and then allowed it to fall under its own weight. Having dropped it one way round, the test should be repeated on the other side.

After these drop tests, several of the rung catches had broken, cracked or been knocked out completely. The ladder is supposed to be fit for use after this test but opening and closing it was now impossible.

Despite this early failure, we carried on with the tests we could.

First up were the tests for deflection with the ladder laying on its side and flat. With the test loads applied, there are limits on how far the ladder can deflect, based on its length. The sample failed both these tests. In both, the sample deflected around 2.3 times more than the limit. In use, a user would find this ladder very flexible underfoot.

The strength test was next. With the ladder set up in the position of use, at 65 degrees, a test load of 2,250N was applied to the rung nearest the centre. However, before the full test load could be applied, the stile nearest to the load point buckled. As the ladder did not withstand the test load, it could fail in use from the weight of a user. 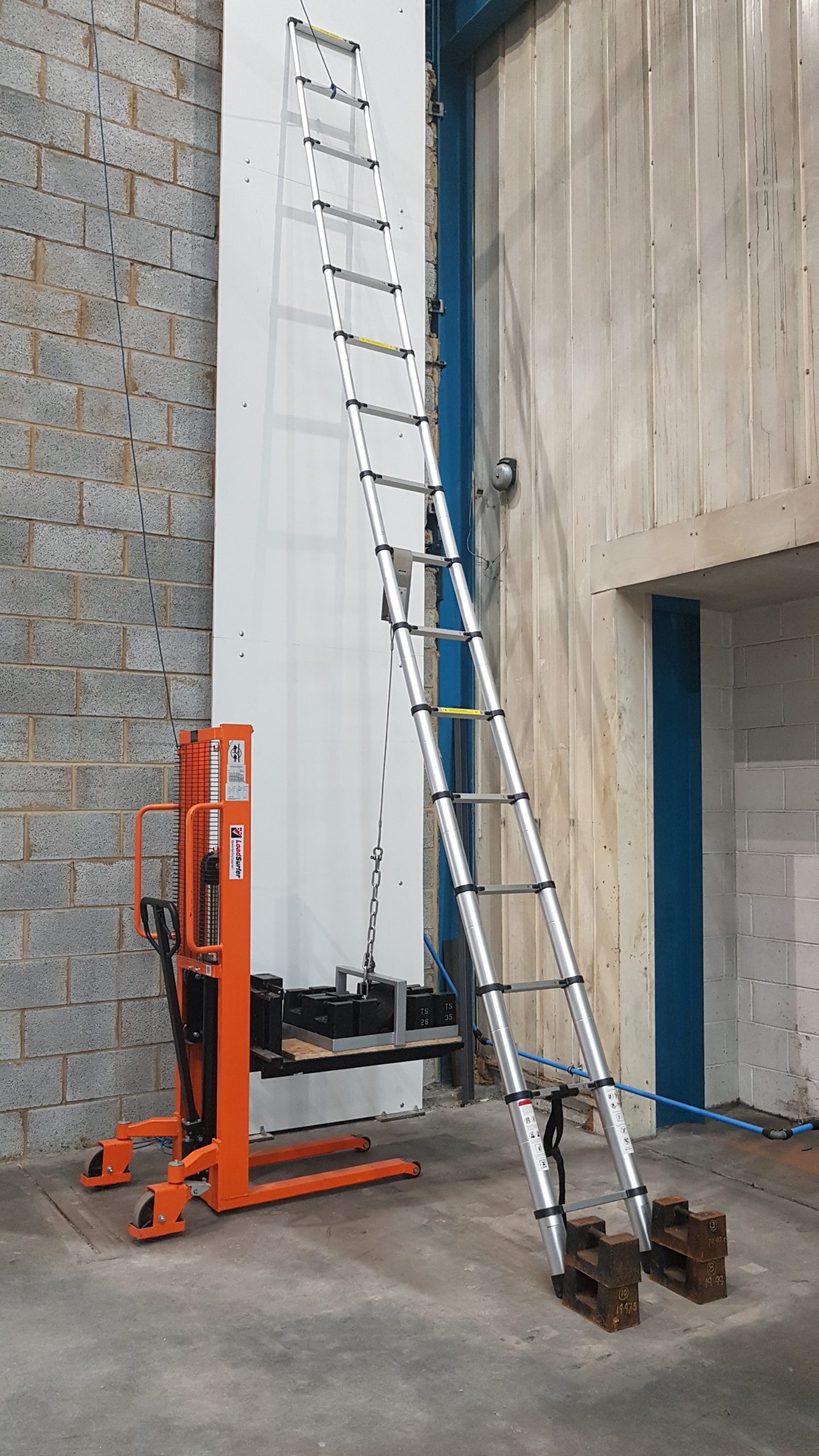 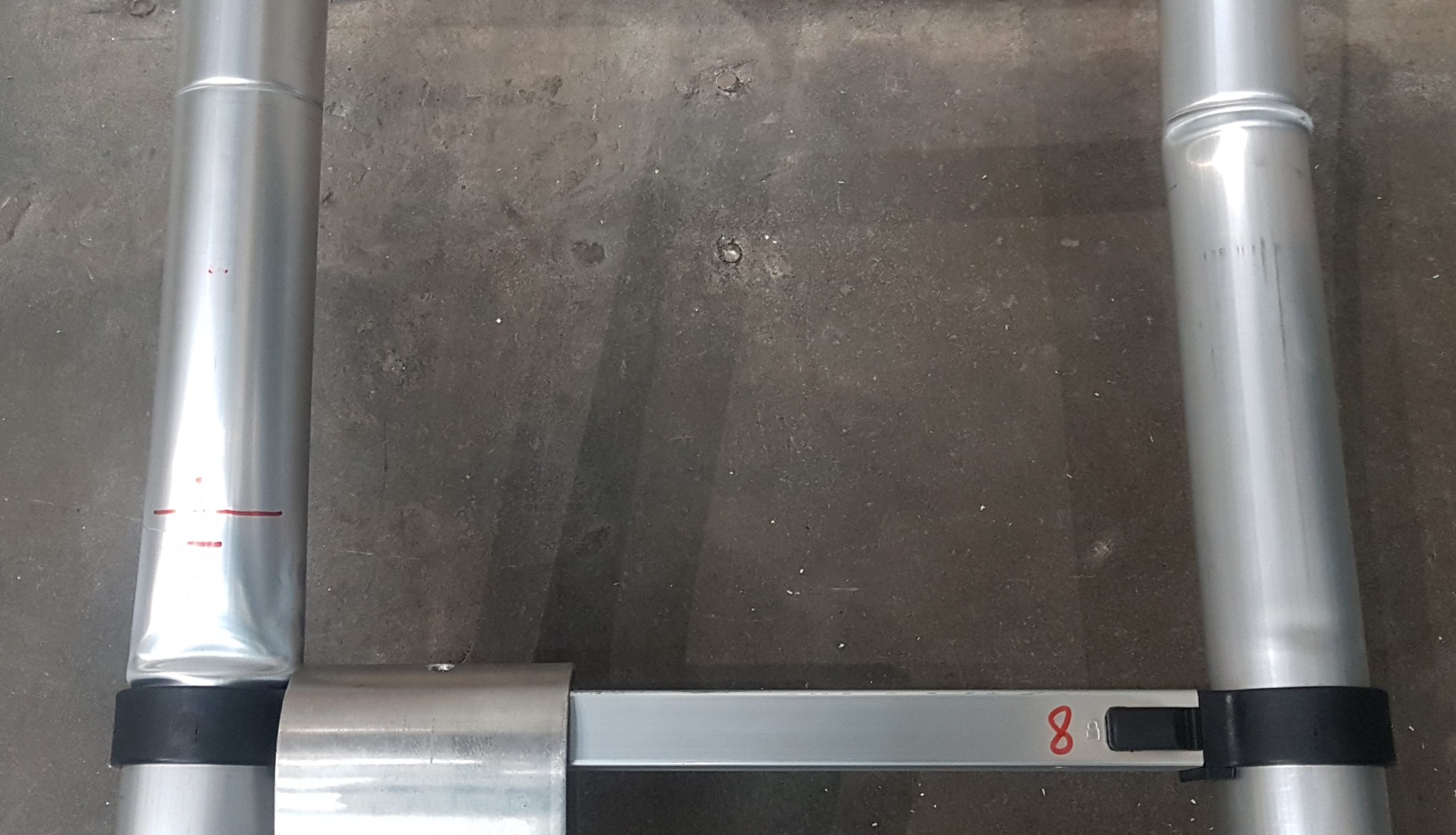 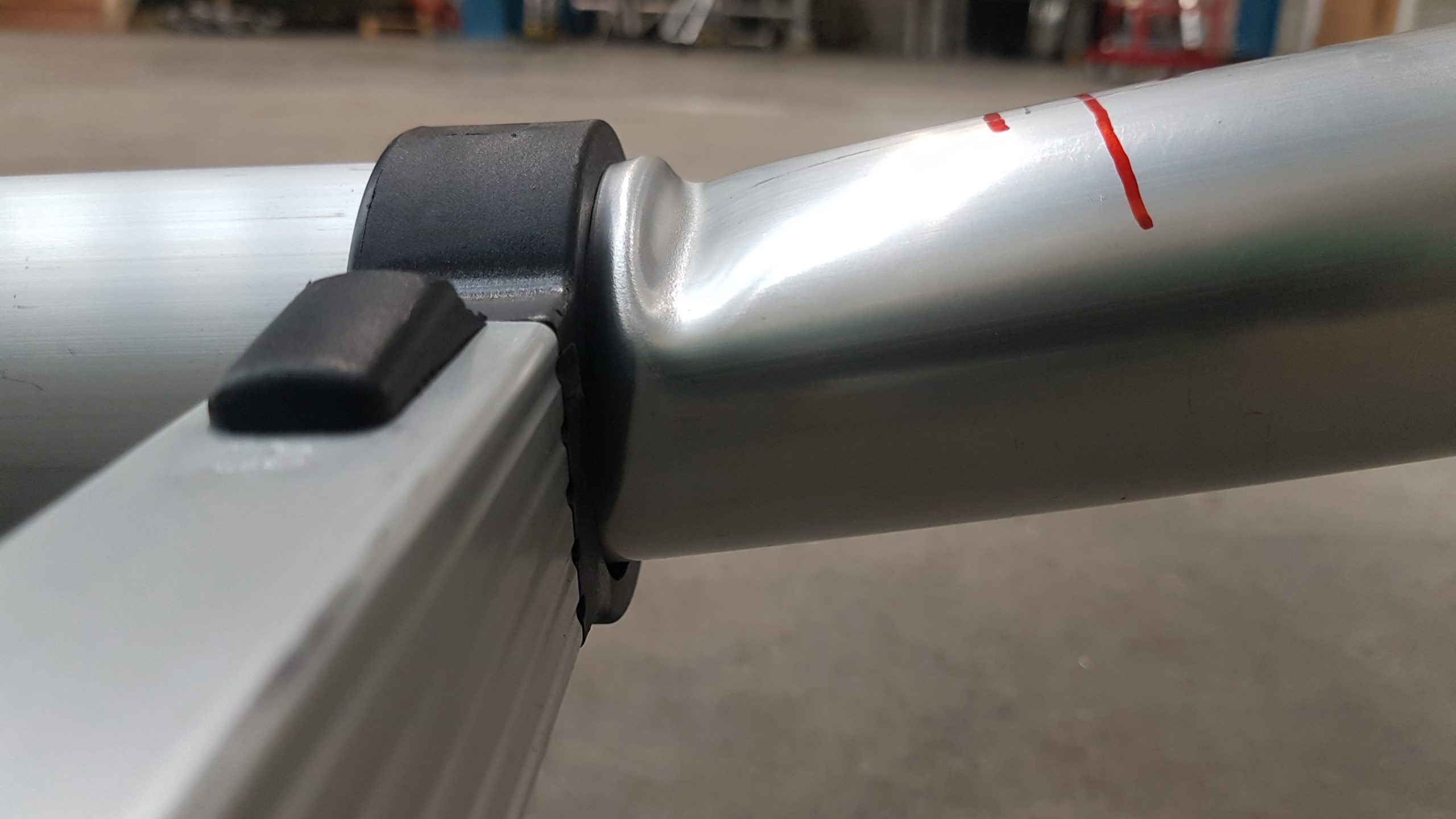 Following the structural failure, unsurprisingly we couldn’t complete the rest of the test sequence.

The Test & Research Centre was founded to help make products and their users safer. Our continuing work with Trading Standards is helping to stop dangerous sub-standard products enter the supply chain. In total, we have helped Trading Standards stop over 800 ladders so far.

“The role of the Imports Surveillance Team at the Port of Felixstowe is to protect consumers by stopping unsafe and dangerous goods ever reaching the marketplace.

“Our officers will target certain consignments when they arrive in the country and physically check them to see if they are dangerous or unsafe. The whole process is a great team effort, from the intelligence we receive about products arriving at the Port, through to colleagues at the Test & Research Centre testing them.

“We always encourage people to make their purchases from reputable retailers and check for the necessary product safety marks. The temptation may be to buy similar items on social media or online marketplaces as they are cheaper. But as we can see from these tests carried out by the Test & Research Centre, they may not be safe.”

“The condition of these ladders was truly shocking. Consumers have every right to expect the ladder they’re buying to be safe, but this case reminds us that there are dangerous products making their way into unsuspecting UK homes and workplaces. If you’re purchasing a ladder, please be vigilant. Source ladders from reputable suppliers who put your safety first – any Ladder Association member is the recommended place to start – and ask to see proof of certification to the applicable parts of BS EN 131.” 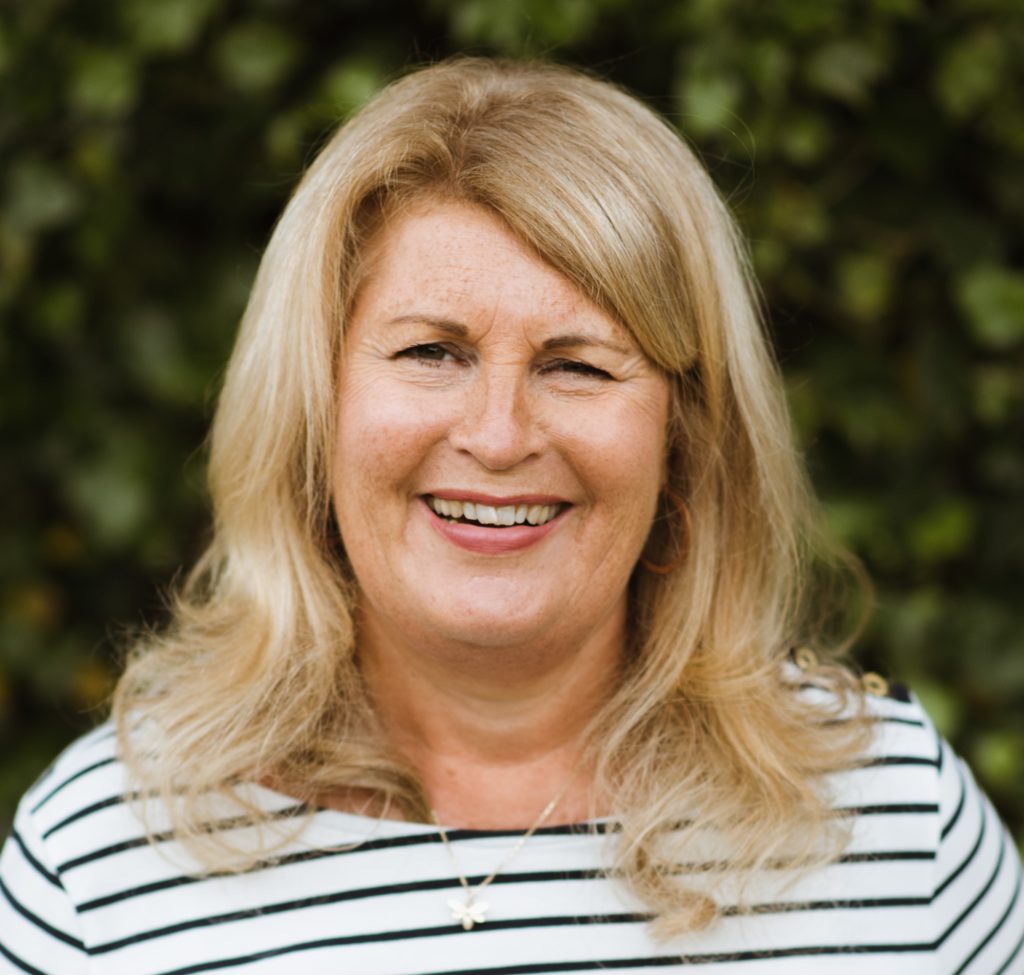 The Test & Research Centre was founded to help make access products and their users safer. We are committed to working with all stakeholders, including the Office for Product Safety and Standards and industry bodies like the Ladder Association, to ensure that users have access to products that conform with British and European Standards.

We work with Trading Standards Officers to offer advice and support on consumer access equipment safety.

We can provide targeted market surveillance testing for Trading Standards against: 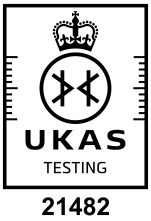 A member of the British Measurement and Testing Association.

Images used on this site were taken during arranged photoshoots at the Test & Research Centre.